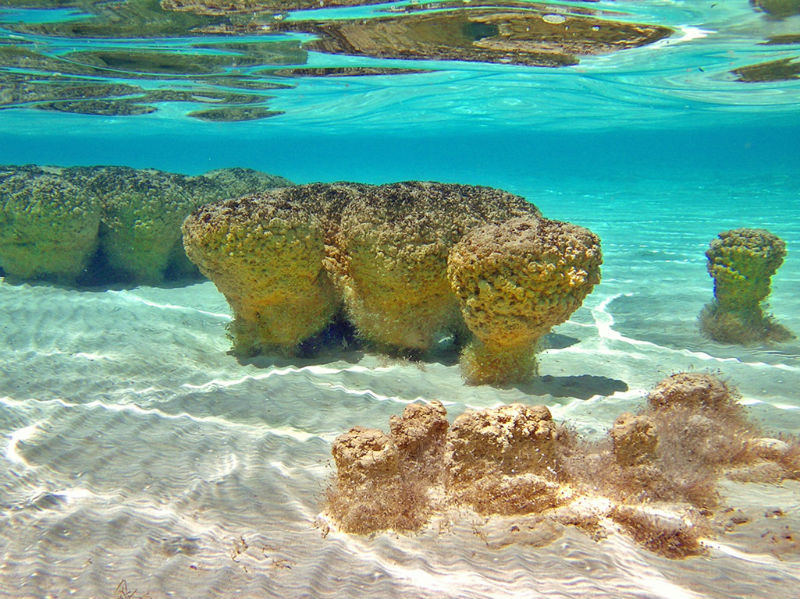 Bacalar and its formidable body of fresh water are outlined as an authentic window to the past of the world. This is mainly due to the fact that the famous stromatolites are found there, a true natural treasure that has official protection and benefits from a hydrological basin that sits there.

We are in the paradisiacal environment of Bacalar, Magical Town of Quintana Roo.

There are many tourist options when visiting these Caribbean destinations, such as sailing on the Bacalar lagoon, for example, but also other corners of Bacalar, such as its areas with stromatolites offers something truly unmissable.

Why it is worth knowing the stromatolites of Bacalar

Due to their rocky nature, stromatolites have enormous potential to be preserved as fossils, especially those that were living creatures and that contributed to the formation of reefs.

The most important thing is the release of oxygen into the atmosphere that they carried out for a long time, a factor that to a certain extent favored the ecological preservation of the area.

Currently, these fossils are emerging as an important tourist attraction in the Mexican Caribbean environment. Day after day tourists from different parts of the world come to Bacalar to admire these ancient organisms of the lagoon, although ignorance and lack of adequate protection measures have caused damage to some of them.

Bacalar stromatolites. What are they and what do they look like?

In general, there is not a full dimension of the importance of these incredible and fascinating living beings and therefore they are not respected as they should, by not valuing the way in which their presence contributes to the ecological preservation of the place.

Now, what is a stromatolite? These are laminated organo-sedimentary type structures that include calcium carbon in their conformation. Such structures grow as they are adhered to the substrate and emerge vertically from it, generating structures of notable morphological diversity.

All those who have the desire to explore these directions of the Mexican Caribbean have an unavoidable appointment in Bacalar, Quintana Roo. To explore the areas where the stromatolites are found, it is worth undertaking various tours, both by kayak and by sailboat to observe them up close, but always trying to preserve the environment of the lagoon.

These are tours that awaken the awareness and interest of vacationers for the protection and care of the wild environment of the Mexican Caribbean. The Bacalar stromatolites are emerging as one of the oldest varieties of life in the world.

It is known that these living minerals can be found in few places on the planet, such as the Red Sea, a certain part of the Australian coast, the Bahamas Islands, the Coahuila community of Cuatrociénegas and in another body of water in Quintana Roo called Chichankanab.

The ecological value of the stromatolites of the Mexican Caribbean

According to experts, stromatolites played a preponderant role in the development of life on Earth, since there was a period, millions of years ago, innumerable stromatolite reefs filled the seas and generated oxygen in large quantities.

With the passage of time this led to a drastic alteration in the world’s atmosphere.

Bacalar, the Mexican Caribbean and the stromatolites

It is important to mention that these ancient forms of life are extremely fragile, which is why they should not be touched, much less climbed to walk through the lagoon.

As if the natural beauty of the Laguna de los Siete Colores in Bacalar was not enough, this formidable mirror of water is home to one of the oldest varieties of life on record: stromatolites.

These ancient organisms, true living fossils, are composed of calcium carbonate and grow vertically, to the point of shaping capricious structures.

Bacalar, the lagoon and the stromatolites

It should be noted that stromatolites such as those of Bacalar, Quintana Roo, were the first living beings that gave rise to reefs.

For this reason, they are of enormous relevance for the development that the Caribbean ecosystem has had over time. This is because they release abundant oxygen into the atmosphere and thereby preserve the environmental balance of Laguna de Bacalar.

How to get to Bacalar

Bacalar is for many travelers a valuable vacation secret, an area full of ecotourism wonders…